Why do wireless issues always begin with a live survey? 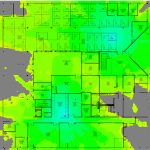 When users complain of poor wireless coverage, the standard first move is always to survey the area where the complaint is. Why is this and can we do it in a better way?

Wireless Coverage is not static

The main reason Full Control Networks begins most wireless work performing a survey is to build a picture of the coverage in real time. Wireless coverage does change over time and there are many reasons for this.

Firstly, the space in which the Access Points are located can change. Meeting rooms come and go. The location of people (big bags of water to wireless) move about the space. And in factory environments similar games of layouts and stock levels are never static. If you are looking into a real time issue, you need to make sure you have real time statistics.

Secondly, even if you had your wireless planned properly, the technology and people change the settings when they detect or experience things they don’t like:

There can be a circle of doom with the above situations, where your attempts to fix one area causes a cascade effect on the surrounding wireless, changing the settings on more APs than you bargained on.

Thirdly, your wireless responds to things you can’t see. Unless you have all your settings fixed, your wireless network will respond to other wireless networks (yours or someone else’s) by playing with the channel and power settings, whether you know it or not. Examples of such hidden devices affecting your wireless can be the introduction of smart devices such as smart screens, printers, door entry systems - all of which have wifi turned on, hence your wifi will respond to their presence, even if you didn’t want it to happen.

A forth, reason is also not obvious to the users. Many of the new wireless standards require both the wireless network and the end user devices to support them before they come live. So, the introduction of a new end user device might pick up on a setting that’s been in your wireless for months but yet to make any difference. This won’t change the coverage pattern but can change the way that device behaves, which tends to raise questions about the coverage!