One guarantee in networking is the belief that “if in doubt, go faster”! It’s a tactic that’s been working for years and the new Multi-Gigabit ethernet options are going to help you, even if your cabling is a “bit old”.

The driving forces behind this are pretty straight forward; the cost of full 10Gig and the speed of the latest generation of Wireless Access Points. Jumping from providing 1 to 10Gbps to the desktop was prohibitively expensive, especially when the end device was only going to achieve 3 or 4Gbps throughput anyway. The latest generation of APs however really have highlighted the issue. These are now breaking the 1Gig barrier and will soon be offering 3-4Gbps, so there is no point investing in the wireless unless you have a way to feed the APs.

The most common copper cabling in the world are those manufactured for the Cat5 and Cat5e standards, which in theory support up to 1Gig, but at short ranges (around 25-40 meters) will probably work at 10Gig too. The issue is if it doesn’t, you have nowhere to go apart from ripping out the cables and installing something like Cat 6A. However, replacing cabling is an expensive and messy business, and who says you have to increase the speed by a factor of 10 each time?

Well for once the standards bodies have agreed and come up with a new standard N Base-T (802.3bz), which is being referred to as Multi-Gig ethernet. The issue has been that to run 10Gig over copper, the modulation techniques used are based around a carry signal of 500MHz. The first cable standard designed around this frequency is Cat6a, which is why it can support the full 100 meters at 10Gig.

Cat6 is designed around a carry signal of 250MHz, which is why its better than Cat5e at supporting 10Gig speed but well short of the distance requirements at around 40 to 50 meters only.

So, what does the Multi-Gig standard offer then? It basically offers the possibility of 2 new speeds, 2.5Gig and 5.0Gig, which when connected to a switch which supports the standard will allow the end device and the switch port to negotiate the highest speed they can in the order of 10Gig, 5.0Gig, 2.5Gig, 1Gig.

Below is a table from the Aruba website showing the options:

When the auto-negotiation is taking place, what they’re really doing is looking at the Signal to Noise ratio on each of the 4 pairs in the cable, then the difference between the 4 pairs. The bigger the gap between the SNR, the faster you can go. The issue is noise, or specifically Alien Cross Talk noise, which will show up in poor installs wear interference from third party devices that weren’t an issue before (such as fluorescent lights) are now a limiting factor.

This is of interest because the Cat5e and Cat6 standards don’t have an Alien Cross talk element to them, this only comes in as part of the Cat6A standard. Hence the state of the Alien Cross talk on Cat5e and Cat6 cables will be one of the main factors in determining the speed Multi-Gig will work at, but your legacy cables were never tested for this!

The standards bodies have moved to correct this and recent amendments now include some new elements of Loss and Cross talk measurements to give more certainty in these areas. However, the vast majority of Cat5e is already out there so its more likely people are going to plug it in first and see what happens! Any testing will probably be done retrospectively. 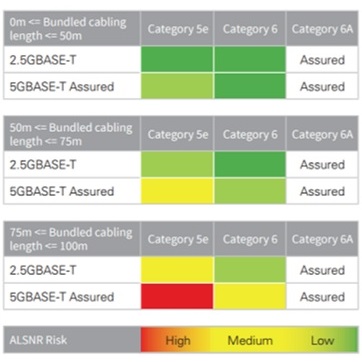 For years people have been installing Cat6 cabling, which has up to now offered very little real- world benefits. However, in the Multi-Gig world it will offer a greater chance of the longer links picking up the higher speeds, so finally might make a difference.

One of the main advantages of using UTP ports over SFP interfaces is that UTP ports can provide Power over Ethernet capabilities. The Multi-Gig standard also has provision for suppling PoE at all these new speeds even up to 10Gig.

At the time of writing, Cisco and Aruba web sites were stating support for the PoE+ standard (60W) at all speeds up to 10Gig. References to the latest PoE++ 90W standard are harder to find although other manufacturers are advertising such capabilities on the Internet so it seems to be just a matter of time. 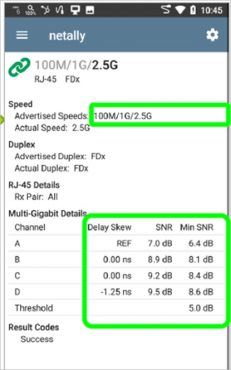 NetAlly have jumped on the Multi-Gig bandwagon and produced a simple test to show you what the cable performance measurements are and why you got the speed you did. To the left is a screen shot from an EtherScope nXG.

This could help you work out that it’s simply a pair that’s out and you could try another cable. Conversely it might show the measurement is so poor, that this part of the network isn’t going to work anyway.

The first copper standard that gives the full 10Gig for the full 100 meters is Cat6A. This is what we see between cabinets in the newer Data Centres and Server rooms, and certainly if you are cabling up for 10Gig, this is the one that the standards are written around and we would recommend.

However, the Multi-Gig standards do give the prospect of breathing new life into your existing cabling and a way of rolling out faster and faster wireless solutions. The challenge is going to be predicting with any certainty what speeds you are going to get and why one cable is performing better than its neighbour.